algae that glow in the dark

The tutorial was developed through experiments during Manuel Lukas’s master thesis.

1. Preparation
At the beginning the laboratory bottle (1 litre) is filled with one litre of distilled water. Care should be taken to ensure that this and all subsequent steps are completed as quickly and sterilely as possible to prevent potential contamination.

Further information:
– The procedure should be carried out at room temperature of 16-23°C
– It is also possible to produce the salt water directly in the bottle with distilled water – this has the advantage of less contamination.
– The laboratory bottles are temperature resistant up to 140°C and can be sterilised in the oven at 100°C for 2-3 hours. 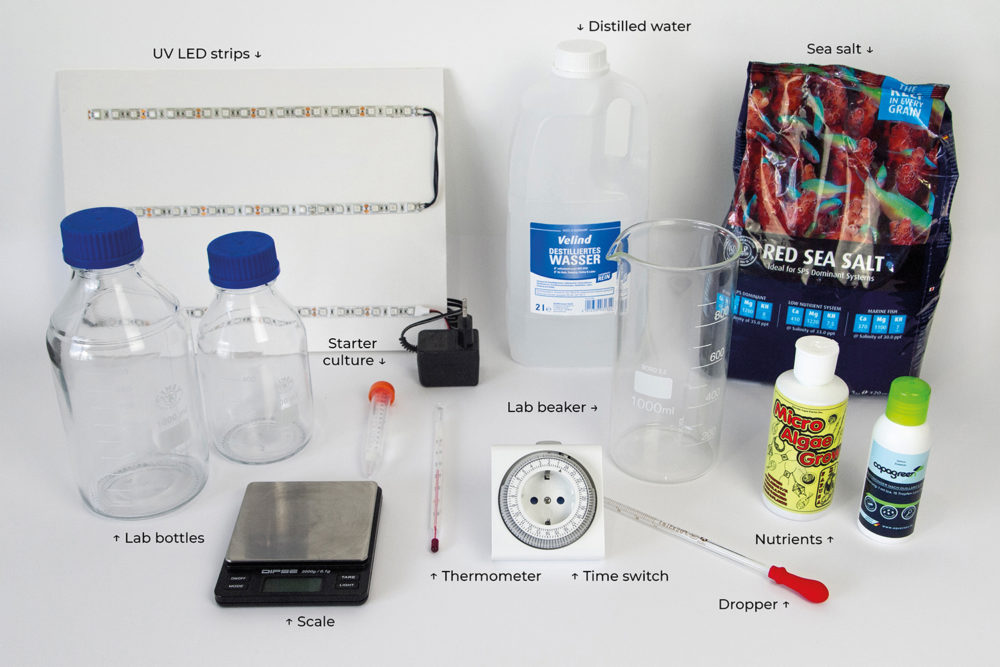 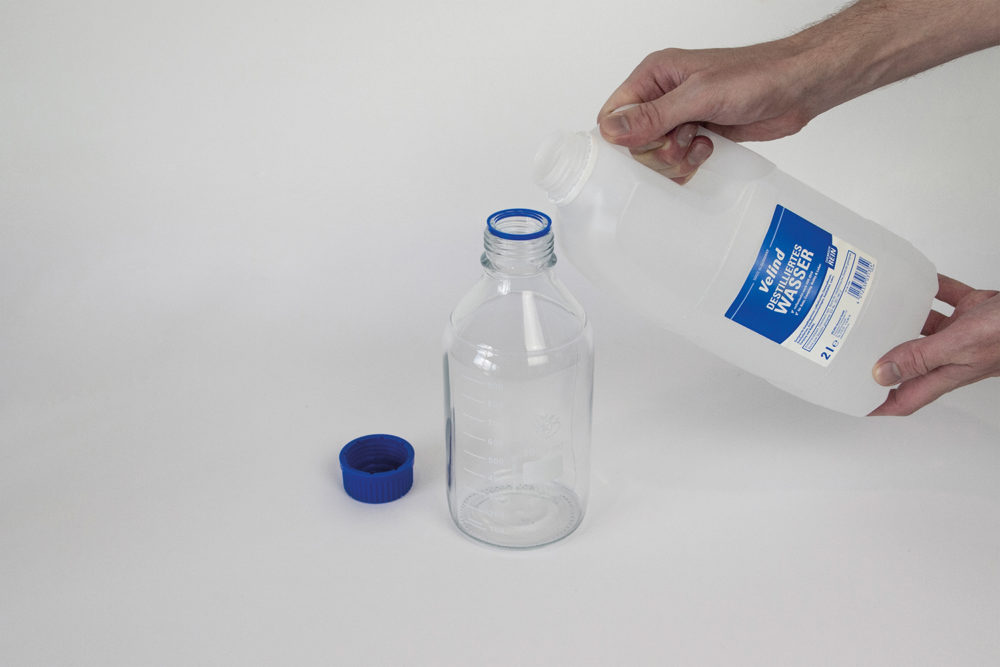 2. Growth Medium I
The sea salt is then weighed. A quantity of 33 g per litre is recommended. The salt is then added to the previously prepared bottle with distilled water. The resulting seawater must be shaken well so that the salt dissolves completely.

Further information:
– However, in regards to salt content, there are different recommendations between 30 and 36.5 g per litre. Unfortunately, these different mixtures could not be tested conclusively, so the average value of 33 g, which is also used in private cultivation, is recommended here.
– The salt can easily be ordered or bought on the internet or in pet shops.
– If possible, the sea salt water should be left to rest for one night before further processing. This additionally ensures the complete dissolution of the salt. 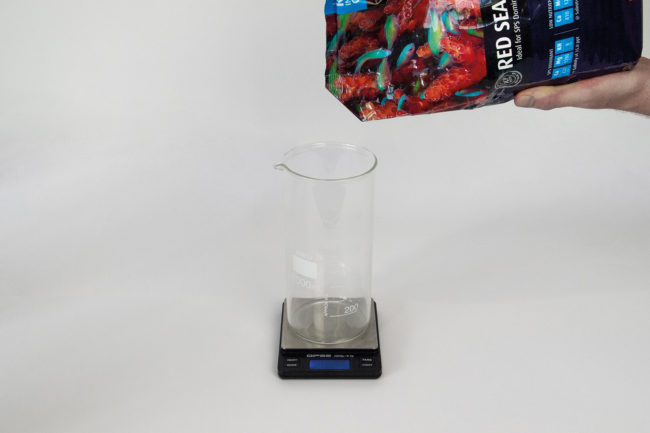 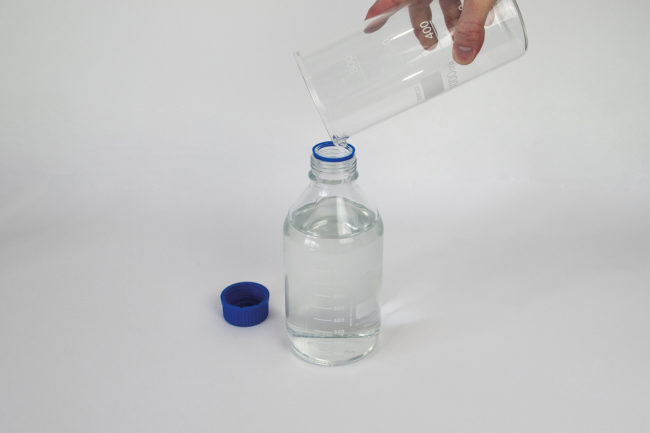 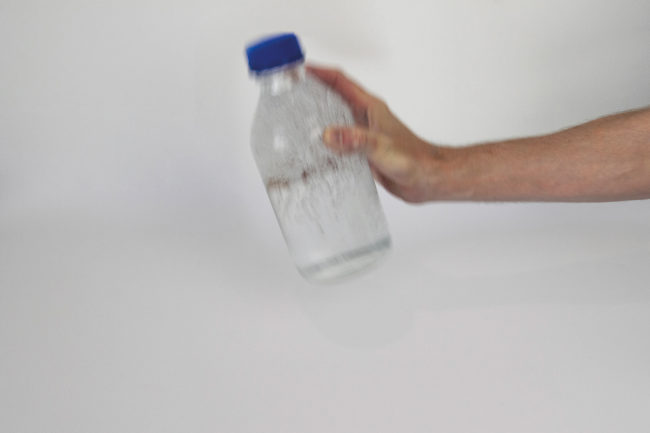 3. Growth Medium II
The next step is to add the nutrients with a dropper, 0.5-1 ml per litre. A recommendation for one of the two products, ‘Micro Algae Grow’ from Florida Aqua Farms and ‘Guillard’s Phytofertiliser’ from Copagreen, should not be made as both have been tested and found to be good.

Further information:
– The finished growth medium should be renewed after 3-4 dilutions.
– The established ‘Micro Algae Grow’ can be ordered here: http://floridaaquafarms.com/shop/micro-algae-grow
– Copagreen’s nutrients can be requested under the following link: https://www.aquacopa.de/phytoplank-clay-copagreen 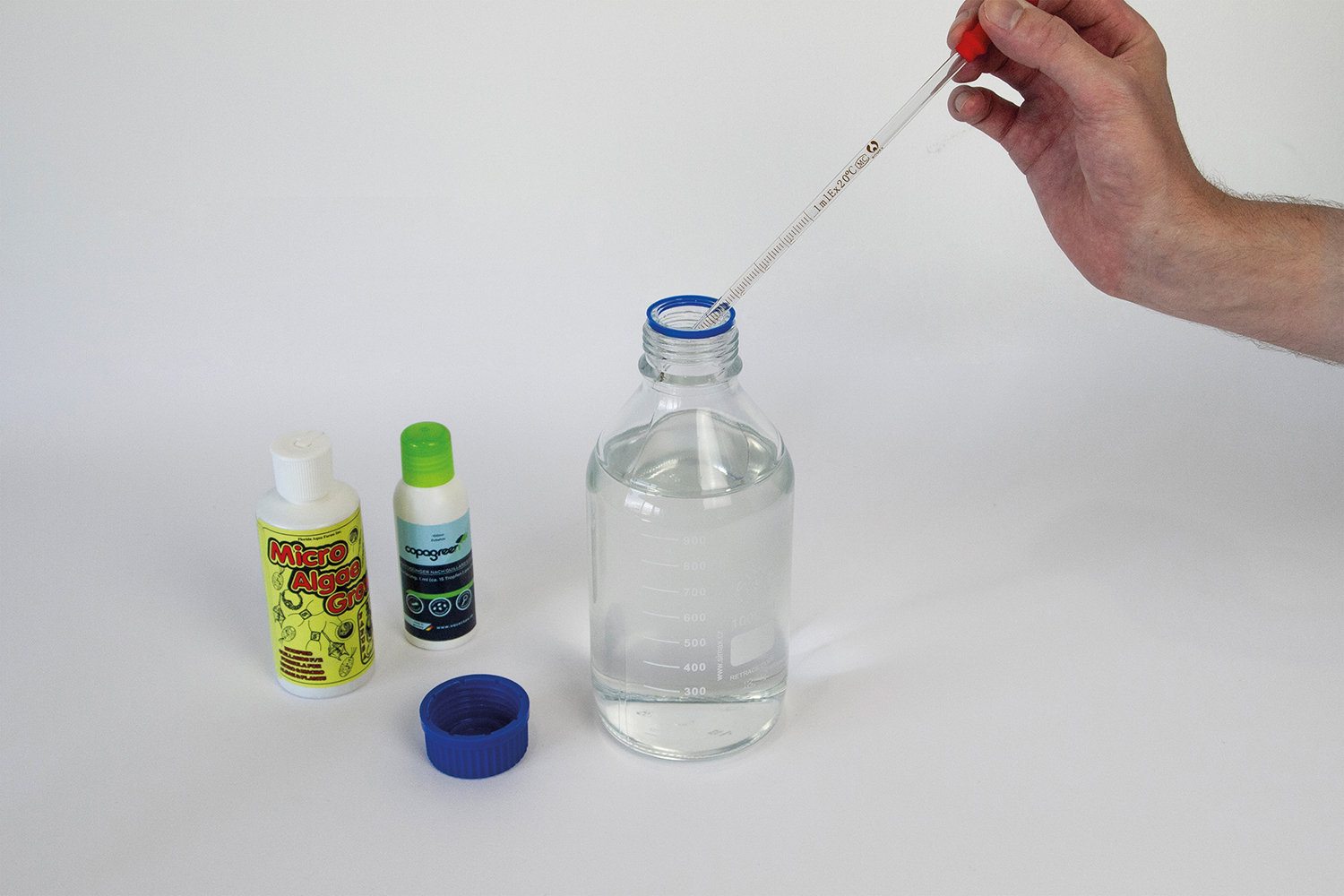 4. Growth Solution
In this step, 50 ml of the growth medium is poured into the smaller laboratory bottle, where the actual cultivation takes place. More liquid should be avoided at the beginning, as the 10 ml starter culture first has to get used to the new medium.

The starter culture will then be added and the bottle is ready for cultivation.

Further information:
– The closures can be held in the hands during pouring, which further reduces possible contamination.
– Starter cultures of Pyrocystis fusiformis can be ordered from the ‘Culture Collection of Algae at the University of Cologne (CCAC)’.
– Larger quantities can also be purchased in the USA at http://sea-farms.com/html/products.html.
– The ‘Collection of Algae Cultures (EPSAG)’ in Göttingen only sells the species Pyrocystis lunula, which unfortunately is not suitable for cultivation at room temperature. 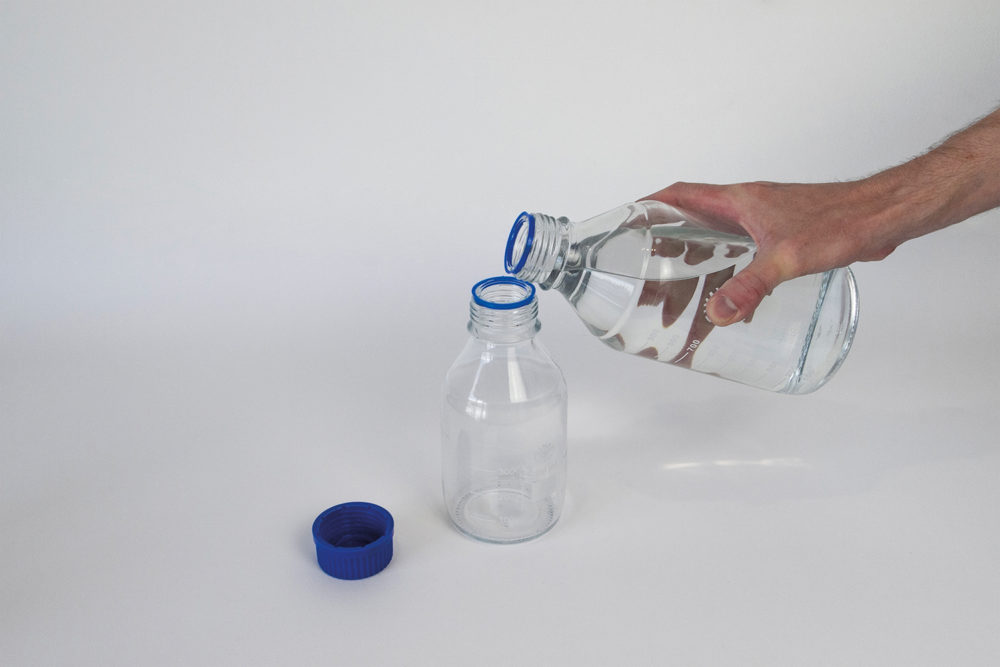 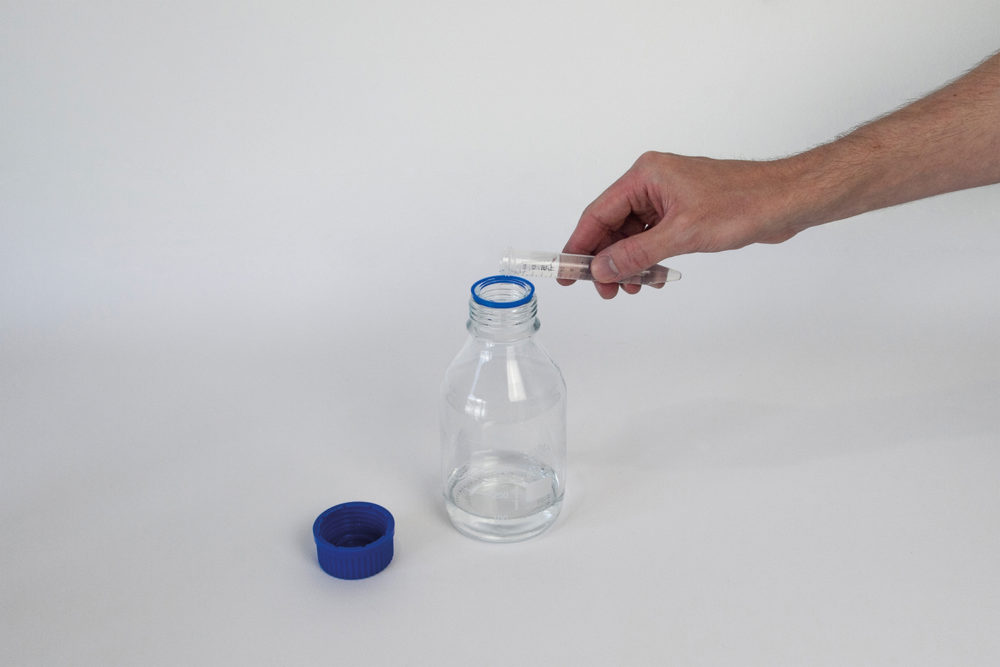 4. Growth
The bottle is stored together with the LED panel in a dark room at a temperature between 16-23°C. A time switch controls the day-night rhythm, which should be set to 14 hours of lighting and 10 hours of darkness. Every fortnight the bottle should then be diluted with a third of the liquid present.

The algae glow in their night phase about one hour after dusk. Through stimulation, such as shaking, the organisms release their energy in the form of light. While the first stimulus is the most light-intensive, the others decrease in brightness before the algae need a rest phase.

Further information:
– If you want the algae to grow faster, a 16/8 hour cycle can be chosen.
– The UV LED strips can be bought in ordinary electronics stores. They should not exceed the number in the example and should be at least 15-20 cm from the bottle.
– Direct sunlight should be avoided.
– Do not cultivate in closed boxes or similar, as the temperature often rises too much due to the LEDs. 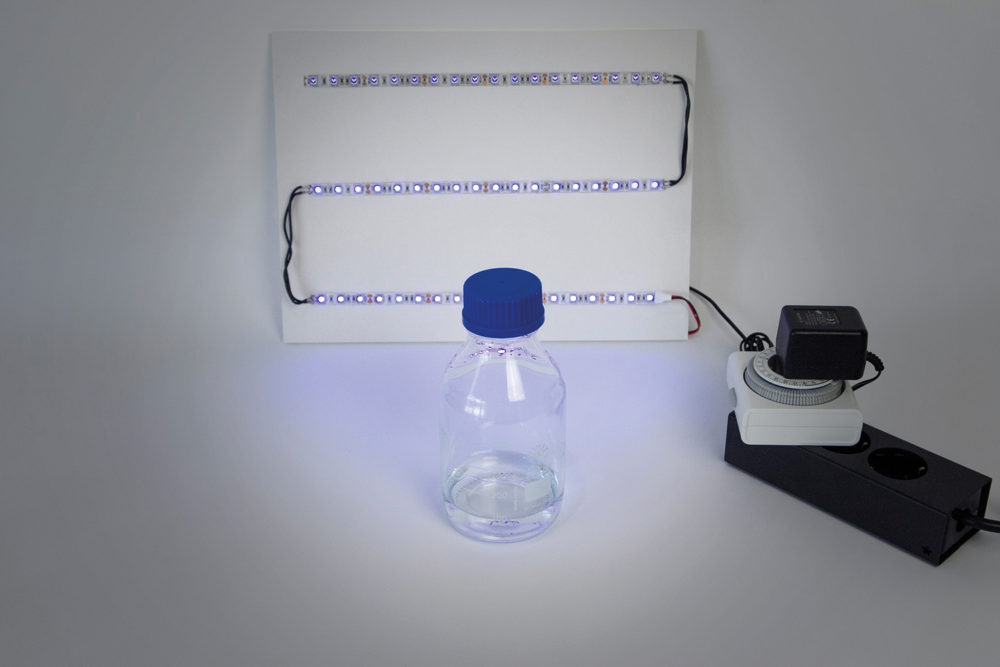 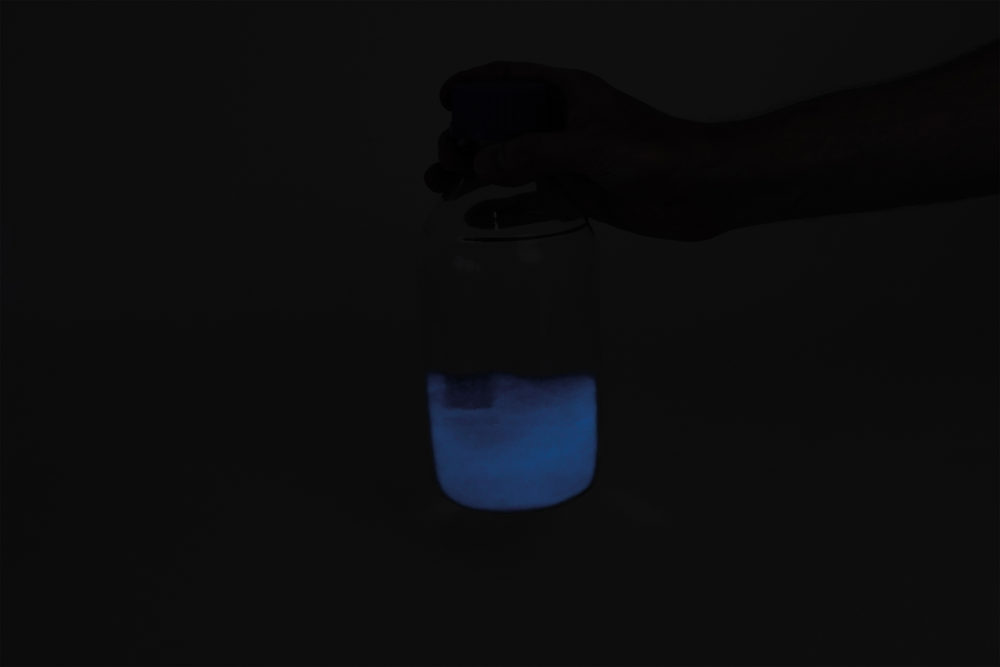