Nature has an outstanding capacity to respond to its environment by adapting to survive changing conditions. There are numerous species capable of forecasting weather variations as an adaptation mechanism for protection. Weather Sensible Structures focuses on the study of two key species that are capable of sensing and processing environmental cues; bees and cockroaches, while making note on species that are capable of modifying their physical shape (volume, size…) such as the Mimosa Pudica and Catterpillars. Inspired by such intelligence this project seeks to develop a chimeric design of a lightweight structure that can foresee environmental changes in temperature and humidity and respond to such alternating environmental patterns; a weather based stimuli-responsive shape-shifting structure.

The proposed design prototype senses specific environmental cues, temperature and relative humidity, and reacts to those inputs by stretching and closing to give cover to people( thus increasing surface area), then coiling back while opening to its original position (decreasing its surface area) when environmental conditions are restored, showing resiliency. The two stimuli chosen as the inputs for the structure to change form are key in weather forecasting. In a tropical climate such as the one in Puerto Rico, before it rains the temperature drops and humidity increases. For the purpose of controlling how the prototype will respond to inputs, it is necessary to establish a neutral range (of temperature and humidity) which is defined as the good weather conditions (Sunny) and changes in the de fined parameters could lead to expecting bad weather (rain).

After a comprehensive study and understanding of the mechanisms that promote such sensibility in the already mentioned species, a second study was made to pair each stimuli to a material capable of sensing and processing cues similar to the specie but in this case with a resulting change in form. Inspired by Doris Kim Sung’s study on thermobimetal, the use of such material is the perfect analogue to changing form due to shifts in temperature. Therefore to experiment with change in form resulting in a change in area we used sheets of bimetal as the pivot point material for our prototype’s response to heat gain, which is an opening and closing motion. The resulting motion is similar to that of a scissoring vibrating motion found in organic compounds with the distinction that the motion only occurs as reaction to a specific stimuli. The consequence was a change in area due to increase in temperature. A simulation of the desired final product shows a sort of coiling back mechanism, reducing the prototype’s area to its original geometry.

The composite structure as a whole is supposed to increase its area or decrease depending on the momentary necessity. If the environmental cues mark an increase in a chance of rain then the structure should expand and provide a larger area of protection. The result was a change in area due to increase in temperature, in theory we would need the opposite to occur, we need the metal to coil when it heats, because a hotter environment means less rain probability. For the metal to act the way we need it to, all we have to do is set up the form thru heating mechanism. A downside to using nitinol, is that it’s not a thermobimetal so it doesn’t go back to the original form while reaching the neutral temperature (in this case a neutral temperature depends on the place where we use the material.

Regarding changes in relative humidity, and the cockroach’s mechanisms of sensing changes in humidity thru hygroreceptive sencilla in the cuticular wall of the cockroach which is a favored model of humidity transduction for its hygromechanical qualities.” (Quote) Wood is a natural found hygroscopic material, therefore it naturally absorbs water from its surroundings leading to fiber shrinkage or swelling which can result in changes in form at a microscopic level. Fiber manipulation of this attribute could lead to possibly hygromechanical qualities that alter the material’s shape. This second material could sum up to the structure’s reaction to weather change as a “passive” response that assess with more certainty the possibility for rain. This passive response will result in the closing and opening of apertures through the structure. A synchronized reaction of both material, bimetal to weather change should be apparent as a prelude to the chance of rain. 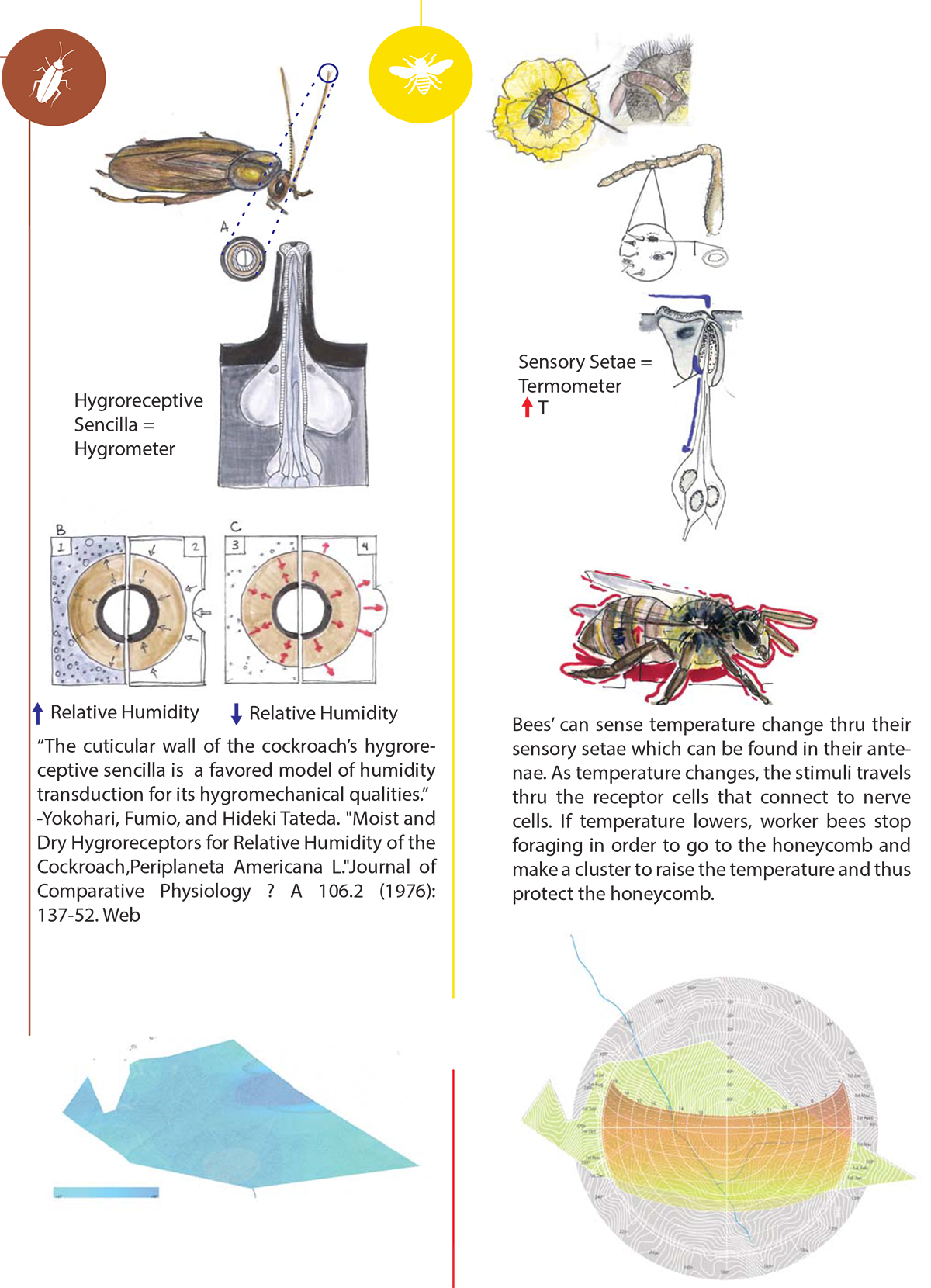 Applications
In tropical climate places where weather seems to be ambiguous, it’s possible to apply this type of structure to parks and places in the open where it’s possible to enjoy the outdoors. This structure could create an active and continuous connection with the open space whenever weather conditions are favorable, then automatically without any energetic input break the outside connection and provide shelter and a visual warn of the following weather change.

At a smaller scale a possible technology design inspired by the species previously mentioned, is a type of automatic “umbrella” which could be applied to city furniture. This reactive element will mechanically respond to specific weather changes such as atmospheric pressure, relative humidity and temperature. Whenever unpleasant or inclement weather conditions develop such as lower atmospheric pressure, high relative humidity and decrease in temperature (typical weather measurement before it rains) the “umbrella” will open to forecast bad weather and offer shelter to the passerby.