a type of smart film that changes its transparency

Introduction
Polymer Dispersed Liquid Crystal (PDLC) devices are a type of smart glazing or film that change their transparency in response to an electrical impulse. When inactive the liquid crystals are randomly arranged, thus scattering the light as it permeates the screen, which results in the translucent, milky appearance of the assembly. When however a voltage is applied, an electrical field is created between the two electrodes, which causes the liquid crystals to align, allowing light to pass through and essentially turning the screen transparent. 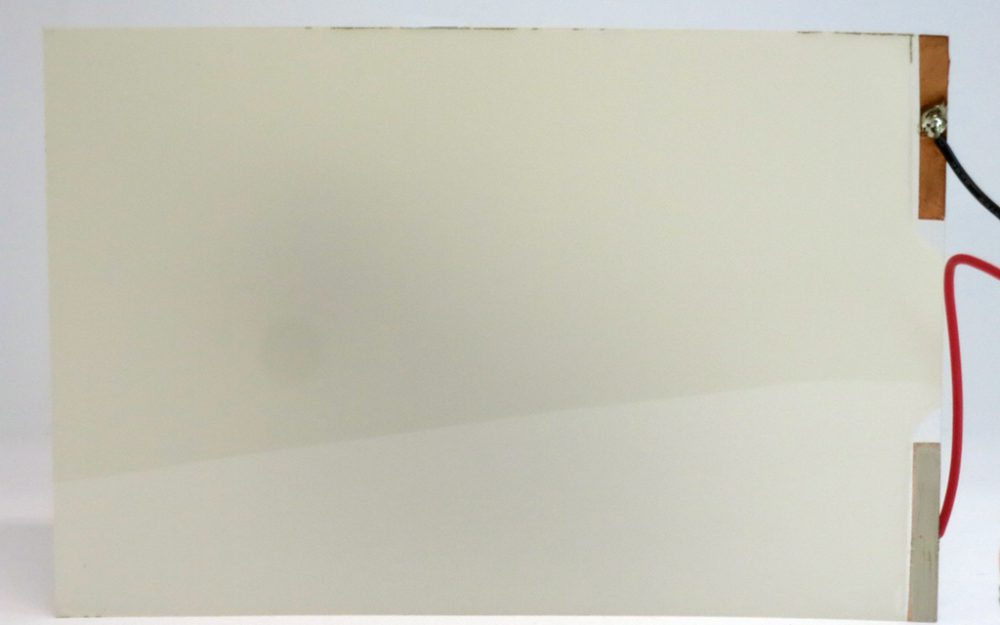 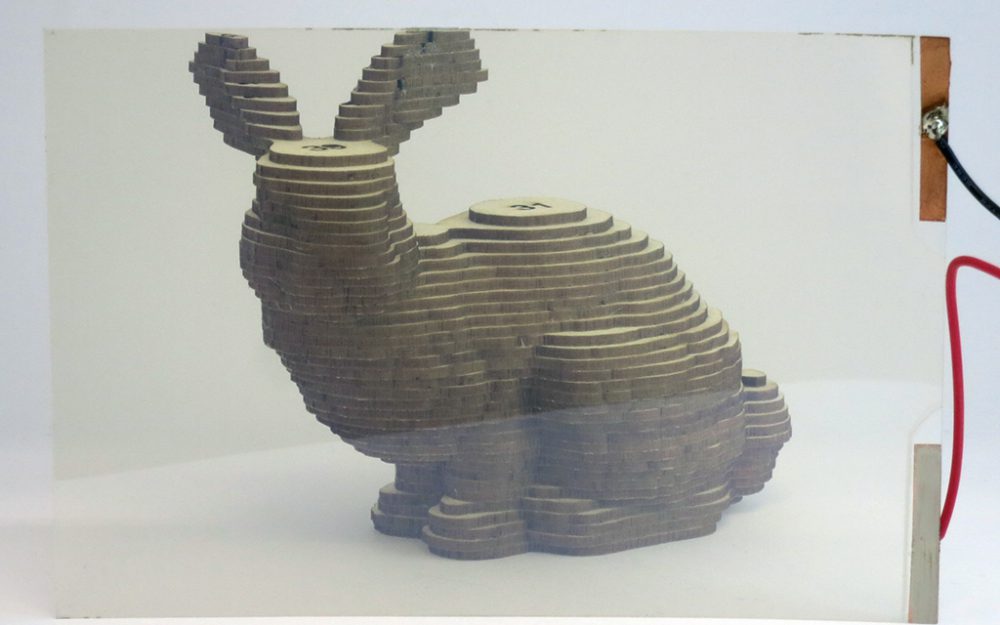 If desired, the degree of transparency can be controlled by adjusting the applied voltage. This is possible since at lower voltages, only some of the liquid crystals align completely in the electric field, so only a small portion of the light passes through whilst most of the light is scattered. As the voltage is increased, fewer liquid crystals remain out of alignment, resulting in less light being scattered. Most PDLC devices available today operate in on or off states only, even though the technology could easily provide for variable levels of transparency. PDLC screens have been used in both interior and exterior environments for privacy control (e.g. conference rooms, intensive-care areas, bathroom/shower doors, fitting rooms) or as a temporary projection screen. PDLCs are commercially available in rolls as adhesive Smart film that can be added to existing windows and cut to size as required.

History
The study of liquid crystals (LCs) began already in 1888 when the Austrian botanist Friedrich Reinitzer experimented with cholesteryl benzoate, observing that the substance had two distinct melting points. In his research, Reinitzer increased the temperature of a solid sample and observed that the crystal changed into a hazy liquid at 145.5°C and to a clear, transparent liquid at about 178.5°C. [1].

The earliest PDLC devices were developed by James Fergason, who is recognized as an inventor of the twisted nematic liquid crystal display. During the course of trying to microencapsulate liquid crystals, Fergason realised that blending a nematic liquid crystal with a water-based solution of polyvinylalcohol allowed him to cast a turbid, flexible film. This electro-optical ‘paint’ could then be added onto an ITO coated plastic sheet. Once dried, another sheet of ITO film could be laminated on the other side. When applying an AC voltage the opaque film cleared [2]. 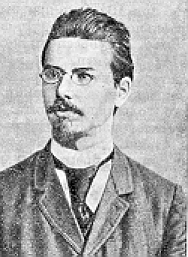 More research into using liquid crystals as screens was performed extensively for more than a decade in the mid-1980’s through mid-1990’s, attracting the attention of major display companies, small start-ups, and numerous academic groups. Albeit These systems went by a variety of names they were all based around the common theme of a liquid crystal cell in which a polymer network produced droplets or domains of liquid crystal. The optical properties of the cell depended on the alignment of the liquid crystals within each domain, with this alignment being determined by the balance of local alignment forces by the bounding polymer network, and any applied electric field. Nearly all of these devices could be switched between a turbid, scattering state and a transparent, non-scattering state [3].

1. Scattering PDLCs
The most common type of PDLCs are the optically scattering form. The concentration of polymer within the liquid crystal is roughly within 30% to 50%. The polymer is cured within the LC/polymer emulsion, such that droplets of liquid crystal separate out within the polymer structure.

Liquid crystal molecules within each droplet have localised order, however each droplet can be randomly aligned relative to others. The combination of droplet size and isotropic orientation of droplets leads to a highly optically scattering state giving the cell a milky appearance. When the material is then subjected to an electric field, electro-optic reorientation of the liquid crystal droplets occurs. This reduces the degree of optical scattering through the cell, giving rise to a transparent state.

Scattering PDLCs are used as privacy screens/windows (switchable between a transparent/clear state and an opaque/scattering state) and are commercially available. Chemical dyes can be added to the PDLC mixtures, so that they may preferentially scatter red, green or blue light respectively. Many researchers are attempting to then use these materials as RGB pixels in flexible displays.

2. Nano-PDLCs / Holographic PDLCs (H-PDLCs)
If the polymer concentration within a PDLC is increased to values of approximately 60% to 80%, and then cured very quickly (using high intensity UV light sources), it is possible to form a PDLC with very small droplet size. Once droplet size reduces to approximately the nano size scale, transmitted light through the mixture is no longer scattered at optical wavelengths.

The resulting nano-PDLC mixture will still switch between randomly aligned and vertically aligned states when an electric field is applied, but no change in apparent scattering occurs. Instead, the optical phase of the transmitted light is modulated only, determined by the average orientation (and average refractive index) of the LC within the PDLC. Nano-PDLC phase-modulation devices have wide-ranging applications since they switch at very fast speeds (10s of microseconds), making them potentially suitable for wavefront correction devices in adaptive optics (used in astronomy, line-of-sight communications and ophthalmics).

Nano-PDLCs are also often referred to as ‘Holographic PDLCS’ (H-PDLCs) since they are often used for producing reconfigurable holograms.

3. Polymer stabilised / polymer network liquid crystals (PSLCs / PNLCs)
At the opposite extreme of polymer concentrations, in the region of approximately 1% to 10%, the resulting PDLC mixture mostly consists of liquid crystal. Under the correct curing conditions, a diffuse network of polymer chains can penetrate throughout the volume. The resulting material is the consistency of a viscous liquid or gel. It’s electro-optical behaviour is almost identical to that of the LC on it’s own, but with improvements in switching times. Further improvements in switching times can also be achieved using sheared PNLCs.

In this system, the cell is subjected to a shearing force, parallel to the glass substrates, which tends to orientate the polymer chains within the PNLC in the direction of the shearing movement. The resulting sheared PNLC devices have been quoted to have switching speeds of 10s of microseconds, comparable to those of nano-PDLCs but with far greater stroke and lower voltage requirements. Like conventional LC devices, PNLCs however are still polarisation sensitive devices and require alignment layers to be deposited on the internal surfaces of the cell. 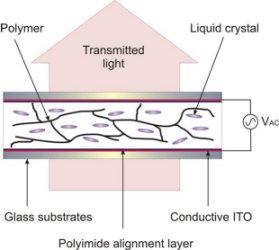 Fabrication [5]
Polymer-dispersed liquid crystals can be prepared through encapsulation and phase separation whilst the latter process has become the primary method of manufacture. Each method produces PDLCs with different properties and characteristics. Among the factors influencing the properties of the PDLC material are the size and morphology (shape) of the droplets, the types of polymer and liquid crystal used, and cooling and heating rates in production.

Encapsulation
Early attempts to produce PDLCs were made with a technique known as microencapsulation. In this case, a liquid crystal is mixed with a polymer dissolved in water. When the water is evaporated, the liquid crystal is surrounded by a layer of polymers. Thousands of these tiny ‘capsules’ are produced and distributed through the bulk polymer. Droplets produced with this method tend to be non-uniform in size and can even be interconnected with each other. Materials manufactured by encapsulation are referred to as NCAP or nematic curvilinear aligned phase.

Phase Separation
In order to obtain PDLCs by phase separation, first a homogeneous mixture of polymer (or prepolymer) and liquid crystal is produced. The liquid crystal droplets are then formed by the separation of the two phases. The separation can take place in one of the following three ways:

The third common type of phase separation is called solvent-induced phased separation. This process requires both the liquid crystal and polymer to be dissolved in a solvent. The solvent is then removed (typically by evaporation) at a controlled rate to begin the phase separation. Droplets start growing as the polymer and liquid crystal come out of solution and stop when all of the solvent has been removed.

Applications
PDLCs hold potential for a variety of electro-optic applications ranging from displays to light shutters or smart windows. Large-scale installations were completed at the Guinness Storehouse in Dublin or the Nissan Micra CC in London using a four-sided glass box made up of 150 switchable glass panels which switched in sequence to create a striking outdoor display. The main use for PDLC windows is in internal partitions, where many companies now enjoy the ability to switch screens and doors from clear to private that can additionally be used as projections screens. Another growing area of switchable glass is in the healthcare industry, where easily cleaned surfaces and patient privacy are essential. One of the earliest and most famous architectural uses was in OMA and IDEO’s collaboration on the Prada Flagship store in New York City, where among other highly innovative technological applications, PDLC windows are incorporated in the fitting rooms [6]. Next to architectural applications PDLCs have been used in the interior of cars or more recently airplanes such as the Boeing 787 Dreamliner.